Visit the DPI Website for the NC Essential Standards for Civics and Economics or hover over the standards listed below.


CE.C&G.1,Analyze the foundations and development of American government in terms of principles and values.

CE.C&G.1.4,Analyze the principles and ideals underlying American democracy in terms of how they promote freedom.

CE.C&G.1.5,Evaluate the fundamental principles of American politics in terms of the extent to which they have been used effectively to maintain constitutional democracy in the United States.

CE.C&G.2,Analyze government systems within the United States in terms of their structure, functions, and relationships.

CE.C&G.2.1,Analyze the structures of national, state, and local governments in terms of ways they are organized to maintain order, security, welfare of the public and the protection of citizens.

CE.C&G.2.2,Summarize the functions of North Carolina state and local governments within the federal system of government.

CE.C&G.2.5,Compare United States system of government within the framework of the federal and state structures as well as in how they relate with governmental systems of other nations.

CE.C&G.2.6,Evaluate the authority federal, state, and local governments have over individuals' rights and privileges.

CE.C&G.2.7,Analyze contemporary issues and governmental responses at the local, state, and national levels in terms of how they promote the public interest and/or general welfare.

CE.C&G.3,Analyze the legal system within the United States in terms of development, execution, and protection of citizenship rights at all levels of government.

CE.C&G.3.1,Analyze how the rule of law establishes limits on both the governed and those who govern while holding true to the ideal of equal protection under the law.

CE.C&G.3.3,Analyze laws and policies in terms of their intended purposes, who has authority to make them and how they are enforced.

CE.C&G.3.5,Compare jurisdictions and methods of law enforcement applied at each level of government, the consequences of noncompliance to laws at each level, and how each reflects equal protection under the law.

CE.C&G.3.8,Evaluate the rights of individuals in terms of how well those rights have been upheld by democratic government in the United States.

CE.C&G.5,Analyze how political and legal systems within and outside of the United States provide a means to balance competing interests and resolve conflicts.

CE.C&G.5.3,Analyze national, state, and local government agencies in terms of how they balance interests and resolve conflicts.

CE.C&G.5.4,Explain how conflict between constitutional provisions and the requirements of foreign policy are resolved.

CE.C&G.5.5,Analyze the development and implementation of domestic and foreign policy by outlining opposing arguments on major issues and their efforts towards resolutions.

We now turn our attention to the Executive branch of government. We will investigate and analyze this law-enforcing part of government on three levels: Federal, State, and Local (County and Municipal). While the President is the face of the nation, and our representative to the world, the people of the United States turn to him as the leader of our nation. We will study the many different roles the president plays on a daily basis while he does his best to uphold the Constitution and carry out the laws passed by Congress.

We will also examine the role of the governor and the delicate balance between the needs of the people and how the state fits into the nation as a whole. As chief executive, the governor is our representative to other states.

In addition, the local governments and both the county and municipal level have an executive who is tasked with enforcing and carrying out the ordinances created by local legislatures.

These pages contain the links to the online content for student practice. It includes Chapter Overviews, Web Activities, Self-Check Quizzes, ePuzzles and Games, Vocabulary Flashcards, Charts in Motion (to accompany diagrams in the textbook), and Interactive Graphic Organizers.

Link to Quizlet! Vocabulary is the key to understanding any subject. Once you can break down the barrier of language the ideas and concepts are wide open. Here you can find the vocabulary for the unit to practice by using online flash cards and by practicing online generated vocabulary quizzes.

Practice your vocabulary for Unit 3B by trying this quiz of the unit's vocabulary.

When you get to the Quizlet Quiz page, you can adjust what type of quiz to take by using the check boxes on the right.

This Infographic diagrams the Executive Branch on the State Level. You are responsible for each item on this chart. Click on the image below to open it full screen in a new window.

This Infographic diagrams the Executive Branch on the County and Municipal (City or Town) Level. You are responsible for each item on this chart. Click on the image below to open it full screen in a new window. 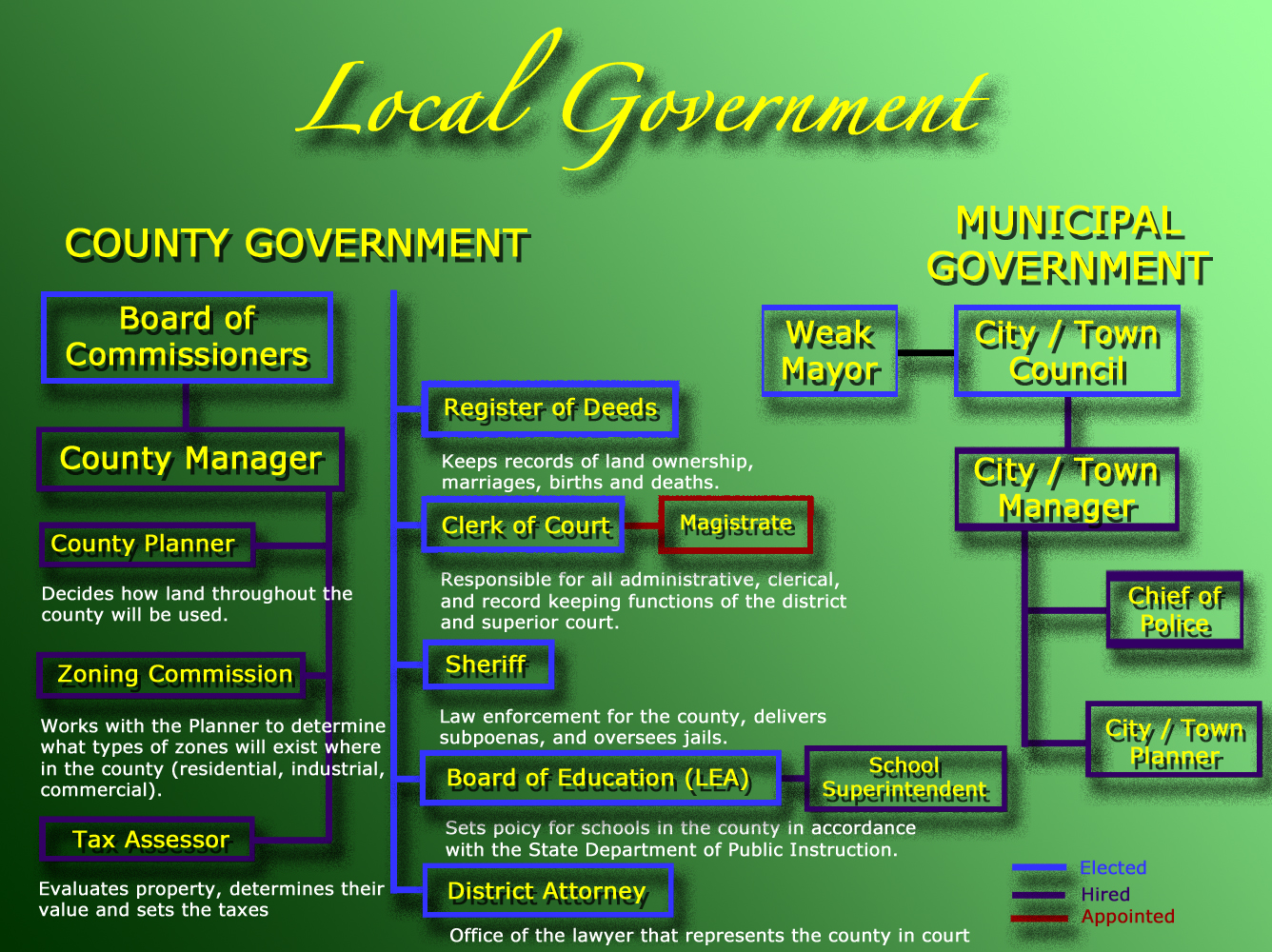 This presentation accompanies section 7.1 and gives just some basic information about the qualifications and privileges of the president and vice-president.

Roles of the President

This presentation accompanies section 7.2 in the textbook and contains information about the roles of the president.

Foreign Policy is a nation's plan for relating with other nations, hopefully in peace, but in preparation for war. This presentation accompanies section 7.3 of the textbook dealing with US Foreign Policy.

As the nation is made up of states, each has its own government, its own Executive Branch. Here is some basic information about the Governor, Lieutenant Governor, Cabinet, and Council of State. It goes along with section 13.2 in the textbook. Please note, as the General Assembly continues to change some of these position, this information may become out of date.

From the publisher:
Craig looks at the expressed powers of the President of the United States - that is the ones you can find in the Constitution. From appointing judges and granting pardons, to vetoing laws and acting as the nations chief diplomat on foreign policy, the Commander in Chief is a pretty powerful person, but actually not as powerful as you might think. The Constitution also limits presidential powers to maintain balance among the three branches of government. Next week we'll talk about the president's powers NOT mentioned in the Constitution - implied powers.

From the publisher:
Craig continues our conversation on presidential powers by looking at those NOT found in the Constitution - implied or inherent powers. Well talk about how the president uses his or her power to negotiate executive agreements, recommend legislative initiatives, instate executive orders, impound funds, and claim executive privilege in order to get things done. Implied powers are kind of tough to tack down, as they arent really powers until theyre asserted, but once the they are, most subsequent presidents chose not to give them up. So well try to cover those weve seen so far and talk a little bit about reactions to these sometimes controversial actions from the other branches of Congress.

From the publisher:
Craig Benzine teaches you about delegation, and informal powers. What are all these federal agencies about? Well, the president has a lot of stuff to do as the chief executive, and as much as Americans like to talk about personal responsibility, the president can't really do all this stuff alone. Because it's a huge job! Same deal with Congress. So, they delegate authority. This is where all the government agencies and stuff come from. The Congress creates them to actually get around to enforcing laws. You'll learn about stuff like OSHA, and the FDA, and maybe even the FCC. Although you hear an occasional complaint about bureaucracies and such, the business of government wouldn't get done without agencies and delegation.

From the publisher:
Craig Benzine talks about how the president gets things done. Filling the role of the executive branch is a pretty big job - much too big for just one person. It's so big that the president employs an entire federal bureaucracy! Today, were just going to focus on those closest to the president, like the vice president, the Cabinet, and the Executive Office of the President. Well figure out which strategy is most useful in helping the president make things happen and well discuss the controversy around the presidents gradual increase in power. Oh, and as many of you noticed - last episode eagle got off too easy. Lets see if we can make it up to you.

From the publisher:
Craig Benzine discuses bureaucracies. Bureaucracies tend to be associated with unintelligible rules and time-wasting procedures, but they play an important, though controversial, role in governing. From the FDA to the EPA, these agencies were established to help the government manage and carry out laws much more efficiently - to bring the rule making and enforcement closer to the experts. But the federal bureaucracy (which is part of the executive branch) has a lot of power and sometimes acts likes Congress in creating regulations and like the courts through administrative adjudications. It's all a bit problematic for that whole "separation of powers" thing. So we'll talk about that too, and the arguments for and against increased federal bureaucracy.

From the publisher:
Craig Benzine breaks down the different types of bureaucracies. I mean sure, theyre all part of the executive branch, but some work more directly with the president than others. Some bureaucracies exist solely to independently regulate industry whereas others are expected to operate like corporations and make a profit. And on top of all that, some of these agencies have sub-agencies! It can all get pretty complicated, so well try to discuss some of the most significant agencies out there and the ones you hear a lot about on the news. Well talk about how they seem to have steadily gained more and more power, and of course, well talk about what all the agencies are for in the first place!

From the publisher:
Craig Benzine tells you how we keep bureaucracy in check. So we've spent the last few episodes telling you all about what bureaucracies are and why they are formed. And throughout we've hinted about this ever-expanding power within the executive branch. So today, we're going to finish our discussion of bureaucracy by looking at methods the other branches of government use to manage this power. From watch-dog organizations to reporting requirements there has been quite a bit of legislation passed aimed at taming the bureaucracy.